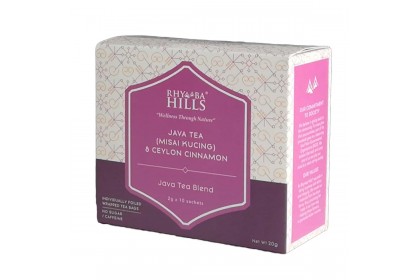 Rhymba Hills® Java Tea Blend is craftily blended with the best Cinnamon in the world, Ceylon Cinnamon and the humble Java Tea (also known locally as Misai Kucing), to give you a taste and aroma that you would want more.

Misai Kucing is a herbaceous shrub which grows to an average height of 1.5 meters. It is a common garden plant because of its unique flower, white and bluish with filaments resembling a cat’s whiskers. This is how it obtained its name in Malay.

– uric acid
Java Tea is known to help reduce uric acid, which if not properly managed, will end up as the very painful gout. Uric acid is caused by excessive consumption of food high in purine such as seafood, red meat (especially organ meat)

Java tea has traditionally been used by the Asian folks to help manage blood pressure. Many folks who have consumed Java Tea as part of their diet have shared that their blood pressure improved.

The active ingredients in Java Tea and Ceylon Cinnamon will also help to manage cholestrol. Cholestrol is a common health issue among folks who consume diet rich in meat, and if not managed properly, will eventually lead to cardiovascular issues

The active ingredients in Java Tea and Ceylon Cinnamon will also help to manage high blood sugar, especially among those whose practice diet rich in carbohydrate and sugar

With the combination of active ingredients in Ceylon Cinnamon and Java Tea, this blend will help with gout management. Drinking this blend regularly may help keep your gout at bay