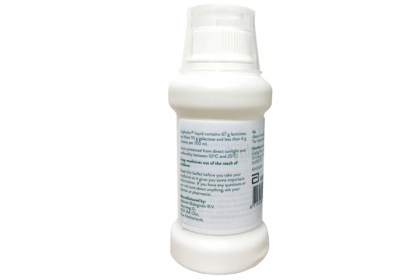 Duphalac solution contains the active ingredient lactulose, which is a type of medicine called an osmotic laxative.

In treating constipation lactulose works by increasing the water content and volume of the stools in the bowel, making them softer and easier to pass.

Lactulose is made up of sugar molecules and is broken down by the bacteria that live in the lower part of the gut.

This leads to the contents of the gut becoming more acidic, which reduces the absorption of a chemical called ammonia.

The presence of ammonia in the gut causes water to be drawn into the lower bowel.

This increases the amount of water in the stools, softening them and making them easier to pass, thus relieving constipation.

It can take two to three days of treatment for the lactulose to have an effect.

In treating hepatic encephalopathy lactulose also works by reducing the absorption of ammonia from the gut.

The liver normally breaks down ammonia, but in liver disease such as cirrhosis the blood may bypass the liver, allowing this poisonous substance to pass to the brain.

By acidifying the contents of the gut, lactulose reduces the absorption of ammonia from the gut, thereby preventing this complication of liver disease.Lactulose is not absorbed into the bloodstream.

Disclaimer:
While M Plus strives to ensure the accuracy of its product images and information, some manufacturing changes to packaging and/or ingredients may be pending updates on our site. Although items may occasionally ship with alternate packaging, product originality is always guaranteed. We recommend that you read labels, warnings, and directions of all products before use and not rely solely on the information provided by M Plus.